The United States government now apparently thinks so. In 2009 the Security Council adopted a presidential statement condemning the missile launch by North Korea (press release here; text here). In response to reporters questioning why the Council was unable to adopt a formal resolution, and whether this meant that the presidential statement was merely imposing political, rather than legal obligations on the DPRK, Susan Rice, the US Ambassador to the UN, said the following:

First of all the United States views presidential statements, broadly speaking, as binding. In this instance, it is more than binding in that it adds to an existing Chapter 7 sanctions regime. So in our view, there is no doubt that the measures that will be imposed as a consequence of this presidential statement by the 24 or 30 of April will occur and will be binding.

Source: US Mission to the UN; see also this CNN report. According to another report, Ambassador Rice also said that the presidential statement “is a strong and legally binding outcome of the Security Council which meets all of the objectives that we have.” Her remarks were echoed by British Ambassador John Sawers, who called the proposed draft “a formal and binding position of the council.” (source: AP).

So, it appears that at least two of the P-5 now take the position that presidential statements can qualify as binding decisions of the Council. This is news – maybe not terribly big news, but news nonetheless. Readers are of course aware that many scholars (and states) have historically been of the view that only formal Chapter VII resolutions of the UNSC can be legally binding. The ICJ disagreed with that proposition in its Namibia advisory opinion, holding that Article 25 of the Charter’s notion of Council ‘decisions’, which are binding in nature, are not confined merely to Chapter VII resolutions, and are subject to no particular requirement of form.

The Council’s practice, which is quite deliberately full of ambiguity, on the whole seems to be supportive of the broader view (for an excellent and succinct primer on UNSC decisions, see this research report). But even within this broader view the orthodoxy has so far been that presidential statements impose only political, not legal obligations – see generally S. Talmon, ‘The Statements by the President of the Security Council’, (2003) 2 Chinese JIL 419, at 447 et seq. The importance of the issue (though it should by no means be overstated) is that a broader notion of binding decisions allows for greater diplomatic flexibility in decision-making within the UNSC.

The UNSC’s treatment of nuclear proliferation and North Korea is indeed an excellent example of how such flexibility can be of practical use. Russia and China in particular have consistently attempted to prevent what they saw as overreaction by the other permanent members. They have especially seemed keen on precluding any possible use of force against the DPRK, particularly through an implied UNSC authorization argument a la Iraq 2003. Thus, the UNSC first adopted Resolution 1695 (2006), which in its chapeau did not reference Chapter VII, nor made an Article 39 determination, but rather invoked the language of Article 24 of the Charter. That it was not a Chapter VII resolution does not necessarily mean, however, that it imposed no legal obligations on the DPRK. Later Resolution 1718 (2006) was explicitly a Chapter VII resolution, with op. paras. 15 & 16 seemingly deliberately designed to prevent an implied authorization argument.

And now we have this presidential statement, the most recent product of negotiations between the P-5. It remains to be seen whether the UNSC’s practice (and the member states) will accept the possibility of legally binding decision-making through presidential statements, which are after all adopted by consensus – a more rigid requirement than for a resolution.

The US is hindering the journey to peace in Ethiopia 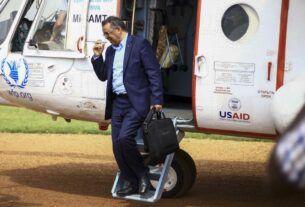