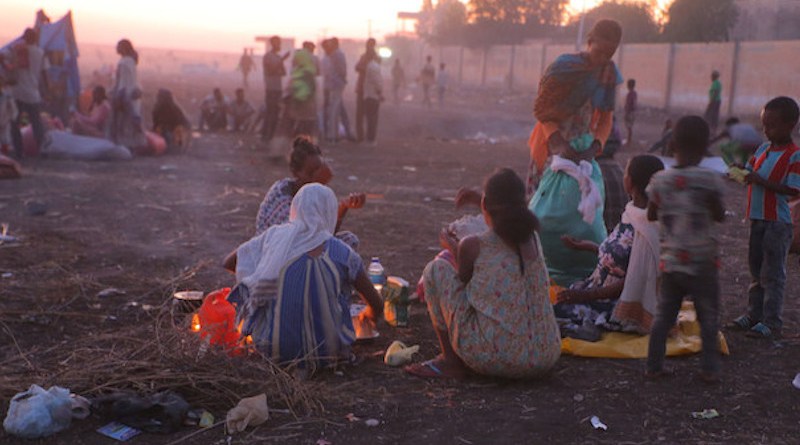 As the armed conflict between Ethiopia and the Tigray Peoples Liberation Front (TPLF) enters a new phase, Ethiopians are uniting against their common enemy. The TPLF is not a group of freedom fighters standing up for the downtrodden; they are a terrorist insurgent force waging a war against a sovereign state. Murdering, raping, destroying property and the lives of Ethiopians, the TPLF is a cancer that for decades has thrown a suffocating shadow of fear and division over the country, a cancer that must be cut out totally if Ethiopia is to flourish.

For 27 years they were the dominant force within a so-called coalition government. Corrupt and brutal, the TPLF stole election after election, trampled on human rights, embezzled federal funds and aid money and committed State Terrorism in various regions of the country. Administering a policy of Ethnic Federalism, they ruled through fear, divided the people along ethnic lines and are widely hated by most Ethiopians.

In 2018, after sustained public protests, they were ousted. However, after such a long period in power their divisive methodology and ideals still have influence. Senior members retreated to their Tigray heartland after losing office, regrouped, plotted, and waited for an opportunity to rise up against the government.

On 4 November 2020 they attacked the Ethiopian National Defense Forces Base in the northern region of Tigray. They killed soldiers, took control of the military’s Northern Command in Mekelle (capital of Tigray) and raided federal armories. This act of terrorism, set in motion an armed conflict in the northern region of Tigray; a fight the TPLF had been itching for, which has now spread into the neighboring region of Ahmara.

Thousands have died, combatants and civilians; claims of rape and sexual violence are widespread; tens of thousands have been displaced, homeless and hungry, with large numbers, frightened and distressed, making their way to camps in neighboring Sudan.

The TPLF’s brutal actions should be condemned unreservedly by foreign governments, particularly Ethiopia’s major donors. But, far from standing with the government, the US, UK and EU have consistently supported the terrorists, circulating misinformation, making false claims against Ethiopian forces.

In an attempt to stop the killing and defuse the situation, on 28 June, the Government declared a “unilateral humanitarian ceasefire” and withdrew its forces from Tigray. In response, the TPLF marched into the regional capital and issued a series of outlandish conditions for complying: They demanded the release of all Tigray political prisoners (imprisoned for atrocities committed over many years), falsely accused Prime Minister Abiy of starting the war, and claimed that Tigrayans “have been subjected to…genocide and ethnic cleansing”. Federal forces are fighting the TPLF not the people of Tigray. But, as a result of the TPLF instigated conflict, civilians in Tigray have been severely impacted.

Unrelenting, obdurate, Tigray forces, which have now combined with another extremist group, the Oromo Liberation Army (OLA), have ignored the ceasefire and continued their attack on Ethiopia, moving into the Afar and Amhara regions bordering Tigray. Death, destruction and chaos is left in their wake with distressing reports of civilian killings, rapes, kidnapping and robbery. Homes are destroyed, office buildings, including Kabele (local government) headquarters vandalized, documents burnt, water and electricity supplies cut, Churches and schools damaged or demolished, cattle killed, crops destroyed.

Over 200 civilians were killed in Afar including more than 100 children, according to UNICEF, and around 300,000 were displaced. Federal forces have now driven the aggressors out of this region. In Deber Tabor in Ahmara, the main hospital was attacked and homes destroyed. A local resident, Mr. Deres Nega told Ethiopian media how his wife, children and friends had been killed by the TPLF. His life has been torn apart. His agony is being repeated throughout the area, his pain is the pain of a nation, a pain that has but one cure, the eradication of the TPLF.

Over 200 km north of Deber Tabor, in Chena Teklehaymanot, mass graves were recently discovered containing 124 bodies, many more people (over 100) are missing feared dead. Witnesses state that the TPLF went house to house and slaughtered men, women, children, even priests (revered throughout Ethiopia) were killed. The massacre, which has been confirmed by Gizachew Muluneh, Director of Communications for the Amhara Regional State, is but one atrocity in a series of coordinated assaults by the TPLF since the government ceasefire. Getachew Shiferaw, a leading Ethiopian activist, relates that, “Civilians were massacred [by the TPLF] in Woldia, Kobo, Alamata, Lalibela, Abergele, Maytemri, Gaint, Gashena and Mersa, among others towns.” He warns that, “Chena is just the tip of the iceberg.”

Prime Minster Abiy Ahmed’s press secretary, has said that TPLF atrocities in Ahmara “were carried out to avenge the military loss the clique suffered by federal and state troops,” as its fighters were routed from Afar. The government believes the Chena massacre was carried out by “the TPLF’s Samri youth group”, who are also thought to be responsible for killing over 1,000 civilians in “the town of Maikadra…last November.” After which they escaped to Sudan and hid in a UNHCR refugee camp.

Such brutal attacks, which are consistently ignored by western governments (who know very well what is actually happening) and prominent mainstream media, are forcing the Ethiopian government, until now relatively restrained, to respond and mobilize its forces. Ethiopia’s foreign ministry recently said the TPLF was pushing the government to “change its defensive mood which has been taken for the sake of the unilateral humanitarian ceasefire,” and that unless (government) overtures for a peaceful resolution were reciprocated, “Ethiopia could deploy the entire defensive capability of the state.”

The government, which has been weak on law and order enforcement, cannot simply sit back and allow the TPLF to murder civilians. They must respond swiftly and decisively, including, if necessary, deploying the air force, something they are reluctant to do because of potential civilian casualties.

Since the conflict began the Ethiopian government has been battling, not just the terrorists, but malicious foreign forces and misleading information from western governments and mainstream media – the BBC, CNN, New York Times, Facebook etc. The US, which is widely believed to be indirectly arming the TPLF, have led the misinformation campaign, and appear (together with the UK and EU) to have sanctioned the TPLF’s attack on Ethiopia.

To its utter shame the Biden administration (and UK and EU) has failed to condemn the TPLF attacks, and has undermined the Ethiopian government from the outset. They repeatedly call for reconciliation (thereby legitimizing the terrorists), and instruct PM Ahmed to negotiate with the TPLF, which is not only unacceptable to the government, but to the vast majority of Ethiopians, who liken the TPLF to a pack of hyenas, pointing out the impossibility of negotiating with wild animals.

In response to their international backers’ call for ‘negotiations’ the TPLF drafted a list of preposterous demands for any such talks. Among other fantasies, they wanted PM Ahmed to step down and be replaced with one of their own, and a power-sharing arrangement introduced. This would amount to the overthrow (with US backing) of a democratically elected government: The Prosperity Party (a party of national unity founded by Abiy) has a huge mandate, taking 410 out of 436 seats in the June 2020 general election. The formation of a new government, which will include opposition parties, is expected by the end of September/early October, and is eagerly awaited.

As these malicious foreign forces seek to destabilize Ethiopia for their own corrupt geo-political reasons, and the TPLF commit atrocity after atrocity, the Ethiopian people are laying aside long held divisions (largely caused by TPLF policies) and coming together, standing shoulder to shoulder with their brothers and sisters against the poison of the terrorists and the Imperial arrogance of America and Co.

While this is unquestionably a deeply troubling moment for Ethiopia, at the same time there is cause for celebration and real optimism: The staging of the first democratic elections in the country’s long and rich history was a major achievement, as was the second filling of The Grand Ethiopian Renaissance Dam (the largest dam in Africa) reservoir. Along with the imminent formation of a new and democratically elected government, these are unifying national events. Significant developments which the Ethiopian people can take great pride in as they unite against the TPLF/OLA terrorists, destructive groups that must be purged from the country completely and utterly if peace and social harmony are to be established, and the  needed work of national transformation is to go ahead.Click here to have Eurasia Review’s newsletter delivered via RSS, as an email newsletter, via mobile or on your personal news page.

Graham is an artist, writer and director of The Create Trust, he founded in 2006. He has run education projects & teacher training programs in Palestine, India and Ethiopia, where he spent two years working with local groups in Addis Ababa. A long time student of the Ageless Wisdom Teachings, and eastern philosophy, he is currently writing a series of essays on education. Contact: graham@thecreatetrust.org 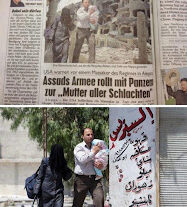 rebuilding an image of enemy in the minds, so that they can do the next war on Syria