If you come across a person describing people by the term “Neftegna”, he/she is not making a mere dissension in politics or history. It is rather a dehumanizing and vilifying genocidal tag on Amhara people. It is a call for identifying anyone who is not in their list of “Full-Blooded”. Obviously, these butchers have in their pockets prepared lists of Amhara men, women, and children to be slayed gruesomely. Those genocidal code words were primarily meant to confuse, conceal, and legitimize crimes against the people of Amhara in hostile places like Oromia and Somali regions of Ethiopia.

Fast-forward, present day mass killings, displacements and atrocities against Amhara people in different parts of Ethiopia are a culmination of decades of hate mongering and indoctrination, stigmatization, and dehumanization of the Amhara people. The recent mass massacre of women, children, and elderly in Chena Kebele of Dabat Woreda, North Gondar attests to TPLF’s never-ending despise for the Amhara people.

With the label Neftegna becoming hackneyed over time, TPLF hatemongers have recently coined another tag, “Amhara elites”, attesting to their interminable disdain for the ethnic Amharas. Cognizant of the fact that “Nefetegna” has become an obsolete tag, Amhara disparagers have coined another codename called “Amhara Elite”

Nevertheless, for all of the growing mentions of this all-evil, immensely powerful “Amhara elite” — can anyone even tell…WHO THEY ARE?

With 40% of the total population of a country… and with the “extreme power” that so many have ascribed to them — there should be a long list of names, right? — both alive and recently deceased… of families, individuals with ties to mass wealth, an overwhelming influence on the federal government and military, countless diplomatic posts etc. etc.

Where are these super powerful Amhara Elites Getachew Reda and his rogue comrades are hunting for? Who are they? For all the pain they’ve directly caused Ethiopia, somebody should know who these “Amhara elites” are? Everyone would have some names, right?

Except for the long dead Menelik or Haile Selassie — in a country of 110 million — can we get some major names? Who are the “Amhara elites”?

For Getachew Reda and “Wedi Adwa” robber barons, if you are born Amhara, you are an ELITE. If you are Amhara, you are a menace; a force to be reckoned with. Amharaphobia is still well and alive in the crooked mindset of TPLF leadership and its cronies.

When TPLF started its assault on the Amhara region, it wasn’t an ordinary incursion or an extension of the 8 months war. It was rather a naked genocidal call motivated by vengeance to deprive, annihilate, displace and starve the Amahara people. Three months after the unconscionable atrocities were unleashed up on the Amhara people in Wollo and Gondar by TPLF’s ruthless gang, the “Amahara elites” are nowhere to be found.

While the Amhara people have been persecuted for decades, the “settle score” operation unleashed by the TPLF junta three months ago left tens of thousands of Amharas raped and murdered, infrastructure destroyed, and entire villages pillaged and burned to the ground. The TPLF invasion- the culmination of a carefully calculated and long-developing genocidal plan against the Amhara — also triggered a mass exodus of close to one Million internally displaced people, living in sprawling, squalid camps — majority of them children, women and elderly. The scale and severity of the atrocities are not yet fully known as a significant part of Wollo is still under TPLF’s siege.

For TPLF thugs, a poor Amhara mother with a newborn in her arms isn’t worth to live another day- was she an Amahara Elite? Even helpless creatures like livestock weren’t spared because they were found in the land of the elites.

The TPLF’s driving organizational force from the very beginning has been hatred for and advocacy of the total annihilation of the Amharas, a fact meticulously explained by Gebremedhin Araya, the former treasurer and top leader of the TPLF, who left the TPLF and distinguished himself as a fearless and uncompromising patriotic Ethiopian truth-teller.

In an interview with ESAT on 12/31/2011 (move clip on video to 7 minutes 26 seconds), Gebremedhin said that TPLF leaders taught their members, followers, and supporters:

The close English translation of the above is as follows:

” … Tigray was a sovereign and independent country. After Emperor Menelik’s invasion, Tigray became an Amhara colony. I have with me a TPLF pamphlet that clearly explains the Amhara hatred. This is the main principle of the Woyane (TPLF) manifesto which says, therefore, we must free Tigray from Amhara colonialism and establish the Government of an independent Tigray Democratic Republic. … The Amhara are the enemy of the Tigray people. Not only that, but Amhara are also the double enemy of the people of Tigray. Therefore, we must hit the Amhara harder. We must annihilate the Amhara. If the Amhara are not destroyed, if the Amhara are not beaten up and uprooted from the earth, the people of Tigray cannot live in freedom. Amhara is an impediment of the Government that we envisage to establish.”

TPLF’s rampage in Wollo and Gondar is a protraction of three decades of Amhara annihilation, massacre, displacement, and deprivation conceived and hatched by TPLF hatemongers. The moment TPLF grabbed power in 1991, largely through the scarification of Amhara youth and farmers, it kindled fires of hatred, enmity, and prejudice against ethnic Amharas. Using maliciously coded dehumanizing nicknames like “Neftegna”, Amharas had been vilified, massacred, and displaced for the last three decades.

The recently coined epithetic nickname, “Amhara elites”, doesn’t epitomize ethnic Amharas in political or economic power alone; the same way “Nefetegna” didn’t embody the gun bearers alone. Under the emblem of another alias, the Amahara people are being set up for another round of methodical genocidal campaigns.

Nevertheless, the last three decades of institutionalized betrayal and detestation for Amhara people have given birth to a new breed of young and old Amharas resolutely shouldering the Amhara struggle to survive and thrive. The Amhara nationalists vividly and unequivocally claim their “Amharaness” as their source of pride and identity. There is an urgency for the Amhara people to recognize the clear and present danger they face as a people and the need to organize under the umbrella of one Amhara, standing together as an elite.

The Amhara People should realize that they can’t survive and thrive under the Unionist Block, since the ‘unionists’ are infected with a malignant Anti-Amhara ideology. It is high time for Amhara people to establish strong Amhara-centric political movements. Every Amhara should know that the ever-growing Amharophobia can eventually result in the holocaust-like calamity unless Amhara people build their own citadel and stay in command to write their glorious history in their own hands. 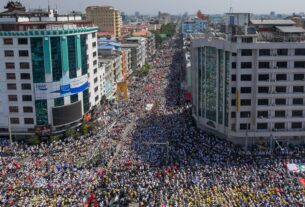 1 thought on “We all are Amhara ELITES – By Sisay Wagnew”