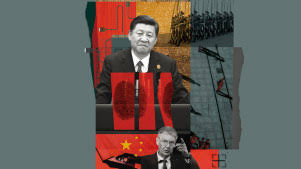 There is not a day that goes by without Western pundits, politicians and media (those in the US in particular) describing China as the “biggest threat” to Western democracy and its way of life.

Samantha Power, former US ambassador to the United Nations and now a Harvard scholar, writing in the January/February edition of Foreign Affairs, echoed the same unsubstantiated allegations as those propagated by the anti-China crowd – “lethal covering up of the pandemic, bullying diplomacy and extraterritorial belligerence, mass internment of Uighurs” – the list goes on.

Indeed, one could argue that Power’s accusations would be more correct if they had pictured the US, rather than China, in this light.

Take “extraterritorial belligerence,” for instance. Senior US officials such as Secretary of State Mike Pompeo have traveled around the world pressuring and threatening countries like the UK, Canada, Germany and others to replace any Huawei and other Chinese equipment in their telecommunication networks.

Pompeo told the UK in no uncertain terms that unless it abandoned Huawei, the country would be cut off from the “Five Eyes” intelligence-sharing network. Another example is the US threatening sanctions against Germany if it did not withdraw from the Nord Stream 2 pipeline project transporting Russian gas to Europe. Pressuring Canada to arrest Huawei chief financial officer Meng Wanzhou was yet another.

The list of US “extraterritorial” conduct is long and wide.

Presumably Power’s allegation of “extraterritorial belligerence ” against China was in reference to Hong Kong or Taiwan, but it was largely based on cherry-picked information. She and her soulmates, for example, conveniently forget that Hong Kong is part of China. As such, Beijing has every right to implement a national-security law on the city.

Returning to the question of how exactly China is supposedly threatening Western values or democracy, did the communist country ever advocate regime change in the West like the US has in China and other countries? Or did China sponsor “color revolutions” like the US did in the Middle East and Eastern Europe?

Did China force its ideology on the world like the US did? Last but not least, did China plant the seeds of destabilization in the US like America did in Hong Kong? The answer is a resounding no, and indeed China has no desire to do so.

A case in point is China’s unwillingness to export its ideology and governance architecture to the world, recognizing that just because “socialism with Chinese characteristics” works for China, it does not mean that framework would work in other countries, given differences in history, cultural values and other institutions that are unique to each nation.

China, in fact, encourages other countries to find a model that fits their circumstances or realities. The US, on the other hand, insists that democracy is the last man standing, implying that one size fits all. The problem with this claim is that history tells a different story.

Insisting on countries that have never had any experience with democracy adopting that ideology has turned some of them into dysfunctional states and in perpetual underdevelopment because of the difficulties in securing a policy consensus.

Against this backdrop, one can be forgiven for speculating that the “China threat” is the country’s remarkable success in narrowing the economic, technology and military gaps to challenge US global dominance.

On technology, China has narrowed the gap with the US in part thanks to America’s own policies. The US Congress barring China from participating in the International Space Station is responsible for the Asian country accelerating its space technology, sending humans into space, building its own space station and other achievements.

As well, China has surpassed the US in fifth-generation (5G) telecom technology and artificial intelligence, just to name two.

On military technology and firepower, though not as advanced or powerful as the US, China could probably deter American military adventurism. It may not have as many nuclear bombs as the US, for example, but it has enough to make the US think twice – or many times – before launching an attack on the Asian country.

The fact of the matter is China was never a threat, or at least there is no proof that it has threatened any country, let alone the US. Its foreign policy, in fact, is quite simple: You do it your way and we’ll do it out way.

And since neither country wants a nuclear war, it is time for US pundits, politicians and media to drop the “China threat” rhetoric. Call out China by all means if it actually does act “belligerently,” but basing such accusations on nothing more than ideological bias is simply wrong and dangerous, as the Vietnam and Iraq wars attested.

Ken Moak taught economic theory, public policy and globalization at university level for 33 years. He co-authored a book titled China’s Economic Rise and Its Global Impact in 2015. His second book, Developed Nations and the Economic Impact of Globalization, was published by Palgrave McMillan Springer.

Horn of Africa: Europe in the hands of lobbyists? The strange parable of Amb. Rondos