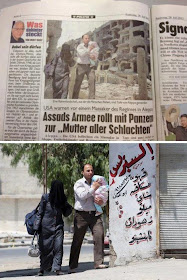 The Kronen Zeitung to falsify the report on SyriaBut this is now not longer uncommon for the mass media.
Whether newspapers or on television, many fake reports and photographs come from another place or another time, when it comes to rebuilding an image of enemy in the minds, so that NATO can do the next war.

The Kronen Zeitung, commonly known as the Krone, is Austria’s largest newspaper

With almost three million consumers with a population of about eight million, the ‘Krone’ is thus measured by the number of inhabitants one of the strongest, most successful and most influential newspapers in the world.
This does not prevent them to falsify the report on Syria.
Or is it because of this ?

And to you ‘crown’ ‘Newspaper’ – you are the mother of all photo forger, or what ?

Take a couple with a toddler running somewhere in an Arab city.
If you do not know the title, you would not think they flee.
Then set the family in front of a debris – scape and says they are on the run.
A blatant lie.
An attentive Reddit user has discovered the forgery.

What should the readers think of the most widely read newspaper in Austria, if they distort so grossly the reality ?
If this garbage paper was not already discredited before, then certainly now.
Disgusting such a blatant deception of the reader with Photoshop.[1]
Using it to make a part of the world that has enough problems as it is look even more apocalyptic? That’s just disgraceful.

Massacre in Houla by BBC
It was, in the words of U.N. special envoy Kofi Annan, the “tipping point” in the Syria conflict: a savage massacre of over 90 people, predominantly women and children, for which the Syrian regime of Bashar al-Assad was immediately blamed by virtually the entirety of the Western media. Within days of the first reports of the Houla massacre, the U.S., France, Great Britain, Germany, and several other Western countries announced that they were expelling Syria’s ambassadors in protest.

But according to a new report in Germany’s leading daily, the Frankfurter Allgemeine Zeitung (FAZ), the Houla massacre was in fact committed by anti-Assad Sunni militants, and the bulk of the victims were member of the Alawi and Shia minorities, which have been largely supportive of Assad. For its account of the massacre, the report cites opponents of Assad, who, however, declined to have their names appear in print out of fear of reprisals from armed opposition groups.[***]

Like all mainstream corporate press agency photographers covering wars their images are sold and used for propaganda purposes.
The statement by Marco di Lauro is hypocritical, since his work has been used over and over to sell the Pentagon and NATO wars.
Marco di Lauro sells his images through TIME, Getty Images,Associated Press and others, and they have been used to sell the illegal NATO military interventions in Sudan, Afghanistan, Iraq and other places.  [2]

Marco di Lauro whines:
“Somebody is using my images from Iraq as propaganda against the Syrian government to prove the [Houla] massacre.
I am really surprised that an organization like the BBC cannot be bothered to check sources and is ready to publish any image sent by a citizen activist, or journalist or whoever they are.”[3]

Commenting on the BBC’s blunder with the Iraq picture, journalist and human rights investigator Keith Harmon Snow says there’s simply no way it could have been posted by mistake.
http://www.youtube.com/embed/5RKj9dNVdF8

Three UN Scandals Expose The Scope Of Meddling In Ethiopia

Truthful One in a Liar Newsroom; Reporter who Exposed BBC Sudden Death