The suffering experienced by Ethiopians in Tigray, Amhara, and Afar weighs heavy on our minds. As we go about our normal lives here in the United States, it is too easy to forget the tens of thousands killed, injured, or displaced in the 10-month-long conflict. While we worry about what coffee to buy in the morning, Ethiopians caught in the conflict are waking up wondering if their village will be attacked and if they will survive. It is incomprehensible and heartbreaking.

Church is a place for people to mourn and reflect. In our churches, we have seen so much pain and worry since the conflict began. Many within our congregations have lost loved ones, and with no sign of the conflict ending, we fear many more will, too. As ever in war, civilians are the victims — never guilty of anything other than living in the wrong place at the wrong time.

Ethiopia’s recent history is deeply complex. The country’s multifaceted challenges require a nuanced understanding, particularly of the last 30 years of political developments. Those three decades were dominated by the Tigray People’s Liberation Front, which engaged in a divide and rule policy, pitting one ethnic group against the other, sowing division and discord among various faith groups. Its leadership embezzled public funds, violated human rights, and jailed journalists and opposition party leaders.

When Abiy Ahmed rose to power and became prime minister in 2018, the TPLF abandoned its privileged position and refused a peaceful dialogue to settle differences with the federal government. Then on Nov. 4, 2020, the organization attacked the Northern Command of the Ethiopian National Defense Forces, triggering the current conflict.

The U.S. has taken a significant interest in the situation, but we fear this interest doesn’t fully understand the context we have just outlined. The U.S. has been intensely critical of the government of Ethiopia while being overtly sympathetic to the TPLF. There have been crimes committed by both sides, and both sides have many questions to answer. However, in failing to call out the TPLF, the U.S. has empowered its leadership. The violence has escalated to neighboring provinces, killing civilians and destroying homes in Amhara and Afar.

In June, the Abiy government made a positive step toward peace, declaring a unilateral ceasefire to allow the flow of humanitarian aid to civilians and enable farmers to ensure a successful crop during the rainy season. The TPLF called it a “sick joke.”

As the TPLF furthers its offensive far beyond the borders of Tigray, we should all be deeply concerned. We have just seen a return of authoritarianism in Afghanistan. The TPLF’s success in overthrowing the Abiy government would see the same happen in Ethiopia.

As religious leaders, we are conscious of stepping into the political arena. We know there are diverse views and opinions on the conflict within the Ethiopian diaspora community and outside it. But the rhetoric of the government and the TPLF is one thing; the aggression is another. And it is clear the TPLF is on the charge and committing atrocities on the way.

There is no escaping the humanitarian crisis that is unfolding. All parties must ensure aid and resources reach vulnerable civilians in Tigray, Amhara, and Afar. But, we feel that is only possible if there is peace. As leaders of Ethiopia’s ancient faiths, we pray peace will come.

We are deeply concerned by the TPLF’s occupation of Lalibela in the Amhara region, which houses the historic Rock-Hewn Churches on UNESCO’s World Heritage List. These sites are part of who we are as a nation and part of human ingenuity. They have to be revered and kept safe. We believe UNESCO should seek to protect these in every way it can.

Fanuel Getaneh is archbishop of the Archdiocese of Washington D.C., Virginia, Maryland, and Delaware. Ustath Jemal Beshir Ahmed is an imam at the Selam Foundation. Yared Tilahun is an evangelist and vice chairman of the Ethiopian Evangelical Churches Fellowship. Endalkachew S. Ayo is the senior pastor at Four Corners Ethiopian Evangelical Church. Dagnachew H. Thomas is vice chairman of the Ethiopian Catholic Church North America.

this content was first published on washington examiner, here➘ 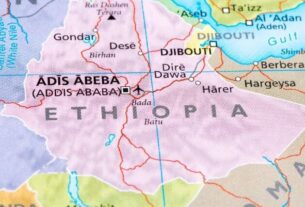 AS ETHIOPIA LAUNCHES A NEW DEMOCRATICALLY ELECTED GOVERNMENT, THE WEST NEEDS TO MAKE SOME CHOICES: FITZ-GERALD & SEGAL FOR INSIDE POLICY

What Do Russians Think About the Relationship With China?

30,000+ Women in UK Report Menstrual Problems After COVID Shots, But Menstrual Issues Not Listed as Side Effect