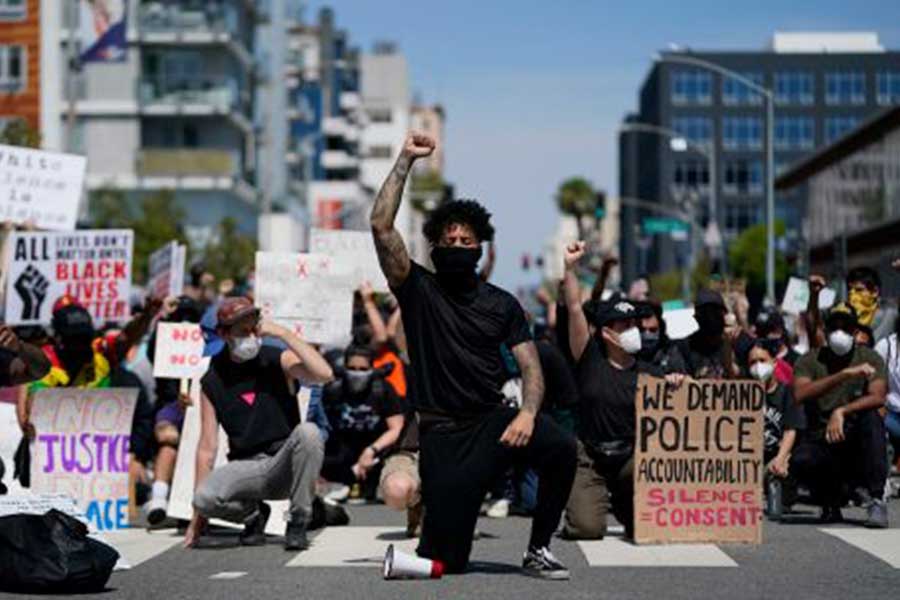 Almost 2 million news items have reported the killing of George by police in Minneapolis.1 News outlets have faced significant internal and external challenges reporting on the waves of protests that have swept through the US and overseas. Outside of newsrooms, journalists have faced arrest and attacks (both online, verbally, and physically). In their reporting, editors and journalists have been challenged on the way that they have framed the last two week’s events.

Heavy criticism was drawn, for example, by the publishing of Tom Cotton’s Op-Ed in the New York Times, which called for military forces to be used in cities where anti-police brutality protests had turned violent. Having initially tried to justify publishing the piece, James Bennet, the opinion editor at the NYT, was forced to resign and the NYT publicly apologise.
Likewise, a column by the Philadelphia Inquirer’s architecture critic, Ingra Saffron, caused public outcry. The column with the headline “Buildings Matter, Too” co-opted the slogan “Black Lives Matter” and equated property damage to the deaths of black people in America. As with Bennet, Stan Wischnowski, the top editor at the Inquirer, has had to resign from his post.

These, and other resignations by high-level news editors, display the level of scrutiny that media companies are beginning to feel over their own shortcomings when it comes to race and diversity. Adam Rapoport, editor in chief of Bon Appétit, has stepped down after a photo surfaced of him and his wife wearing brownface. Rapoport also faced accusations of having gaslit women of colour. Christene Barberich, co-founder of Refinery29, also resigned after former employees described the “Toxic Culture” at the organisation.

Far from isolated incidents, these are indicative of an industry that lacks the diversity of the population it seeks to simultaneously inform and represent. The US Census Bureau says that non-Hispanic white people make up 60% of the US population. In comparison the New Leaders Association’s 2019 Diversity Survey shows that 80.9% of surveyed “Newsroom Leaders” were white. Whilst the Census shows 13.4% of Americans to be black or African American, only 7.5% of journalists who completed the survey identified as such. Recently, some have suggested that layoffs during the coronavirus will disproportionately affect journalists of colour, deepening this issue.

Both the NYT’s and Inquirer’s reporting was unquestionably irresponsible. However, the disproportionate representation of white voices has subtler effects that are harder to spot and harder still to prevent. It allows the reporting of events, like those we have seen in the last two weeks, to be framed in a particular way. It allows for the emphasis of reporting to shift away from police brutality and systemic racism. Instead, it allows narratives to shift from that of protest to that of “looting”, “rioting”, and “violence”.

Below is an analysis of the nearly 2 million news pieces that mention George Floyd. It focuses on the particular language that editors and reporters use when reporting these events. This language, as with the narrative it creates, is chosen purposefully by those that use it.

All Coverage on George Floyd

In the news, Floyd’s killing has become near inseparable from the demonstrations that have followed.

This means a significant portion (almost 43%) of coverage on the Floyd demonstrations has made little or no direct reference to the broader issues being protested.

This gulf allowed the narrative to begin to shift away from the issues that are protested, and instead focus on the protests themselves.

This above data was pulled from a broad dataset, and gave no weighting to the quality or influence of the sources examined. Below is a closer examination of the language used in some of the most influential outlets in the US. We looked at how likely each of these outlets were to link George Floyd’s death to each of the following: Antifa, Arrests, Crime, Curfews, Looting, Police Brutality, Racism, and Rioting.

We looked at five of the most influential US broadcasters: Bloomberg TV, CNN, CNBC, Fox News, and MSNBC.5

Without watching each segment6 individually we can only draw limited insights as to what the focus of each segment was. 7 However, by examining the language each outlet used in each segment, we can begin to get an understanding of topics covered. (For the specific words examined – see Appendix)

Broadcast coverage on George Floyd’s killing. In each case, the percentage of coverage that mentions each topic is shown. The results are formatted such that, in each category, the most likely to relate the killing to a topic are red, and the least likely are green.

Of the most frequently commenting outlets, CNN, Fox News and MSNBC, the results are telling, if unsurprising.

In news segments that mention George Floyd, Fox was approximately three times more likely to mention riots and approximately twice as likely to talk about looting. Of the 1451 segments that Fox News has run, only 595 have not mentioned rioting or looting.8 That means close to 60% of all coverage by Fox News has linked George Floyd’s death to these topics. 60% of Fox News’ coverage on the killing of an unarmed black man has managed to link his death to rioting and looting.

In contrast, of the three major outlets, Fox News proved the least likely to mention either police brutality or racism. While CNN mentioned racism most often, it still only linked Floyd’s death to racism around a quarter of the time.

Looking at the 10 papers with the greatest circulation, 9 we compared how often the same terms were likely to appear in the same article as George Floyd.

Print coverage on George Floyd’s killing. In each case, the percentage of coverage that mentions each topic is shown. The results are formatted such that in each category the most likely to relate the killing to a topic are red, and the least likely are green.

However, remnants of this are still evident. It is telling, for example, that the New York Post mentions racism the least out of any of these outlets. Likewise, The Wall Street Journal, generally taken to be conservative leaning, shows comparative disinterest in the subject of racism.

Some differences can be explained by the regional focus of papers. For example, the relative absence of coverage on curfew by the Boston Globe is likely a result of the existing curfew put in place in Boston as part of the city’s efforts to mitigate against the coronavirus. In contrast, curfew was only introduced in Los Angeles on May 30th, which explains the LA Times’ focus on this topic.

Perhaps most surprising is The Washington Post’s, typically considered left of centre, focus on antifa, arrests, crime, and riots. It is not immediately clear what the cause of this was.

Comparisons can be made here between how broadcast and print outlets perform. The most striking difference is the likelihood of a piece to link the killing to racism or police brutality. Print outlets proved far more likely to mention either topic. A possible reason for this is that print pieces tend to be longer form than broadcast segments, and therefore offer journalists more of an opportunity to contextualise the killing in the broader issues of systematic racism. With this in mind, it is alarming that for all outlets, fewer than two-thirds of coverage links George Floyd’s killing to racism. Even more concerning, only The New York Times mentions police brutality in more than half its articles (50.2%).

Online coverage on George Floyd’s killing. In each case, the percentage of coverage that mentions each topic is shown. The results are formatted such that in each category the most likely to relate the killing to a topic are red, and the least likely are green.

Divides along political lines could again be seen in online coverage. Immediately evident was the emphasis both Fox News and Breitbart placed on reporting on Antifa. In both cases, it seems reasonable to assume that Trump’s rhetoric around antifa (culminating with him attempting to define ‘them’ as a terrorist organisation) has been heavily reported by these outlets. Likewise, both Fox and Breitbart place significant emphasis on rioting and looting.

The Huffington Post also seems to remain true to its liberal reputation. It is telling that it has the greatest focus on police brutality and on racism of all the above outlets.

It is also interesting to reflect on the sheer quantity of articles that each publication has published on the topic. Fox News has updated its website with news about George Floyd approximately once every 10 minutes since he was killed. This is all the more staggering when considering Breitbart, an outlet with a much smaller (albeit perhaps a more dedicated) audience than any of the others listed above has mentioned George Floyd more than even CNN and the NYT.

Lack of diversity in the makeup of newsrooms doesn’t just lead to one-off examples of bad reporting, although in the last two weeks we have seen particularly egregious examples of this. Lack of diversity is felt in the overall quality and emphasis of news coverage. It shapes the language and the narrative portrayed by the media and thus, subtly molds the people’s understandings of events around them. Discrepancies in language are felt unevenly across outlets, and in this way, across political lines. As such, emphasis on certain phrases and certain words raises the volume of the echo chambers people increasingly find themselves in.

Nb. These terms are non-case sensitive & if a word appears as part of another word it will be detected.

2. These articles included at least one of the following words (or variant including them): protest, protests, protesting, protested, protester, or protesters.

5. In future work we would like to expand the selection examined.

6. Each segment was taken as the five minute period around “George Floyd” being mentioned

7. Watching all of these segments would take around 430 hours.

10. We decided to filter out online outlets with a specifically regional focus for this. Likewise, to prevent our list from becoming too extensive we limited it to only include outlets that have over 400 articles mentioning George Floyd.

US department of State; Meeting on Ethiopia